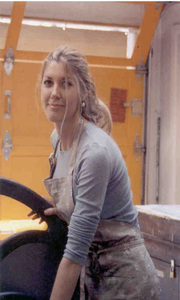 « My interest lies in the power to evoke disquieting and elusive moments with subtle nuances of hope- in the form of light  that the richness and halftones of the mezzotint can uncover. [...] I am an explorer of twilight zones and ambiguous spaces. Much of my recent work explores ambivalence - suspended - the struggle with insight and doubt , hesitation  and commitment – the difficulty of existence. Moments of isolation and dislocation, stillness and silence  where introspection and alienation are consciously engaged and interrogated. People waiting  in darkness caught between expectation and anxiety is the most haunting imagery. » Cleo Wilkinson.

Born in Melbourne, Cleo Wilkinson is a painter, sculptor, photographer and printmaker specialized  in the mezzotint print technique. Graduated from Elam Art School (Auckland University, New Zealand), she has continued studies with further workshops in Oxford, New-York and Barcelona. A recipient of over 75 major international and national print awards her work is also included in over 90 internationally significant major collections, galleries and museums world wide including the  Victoria  and Albert Museum (London) and Machida City Museum of Graphic Arts (Tokyo), Yekaterinburg Museum of Fine Arts (Russia) and exhibited at the National Museum of China in Beijing .